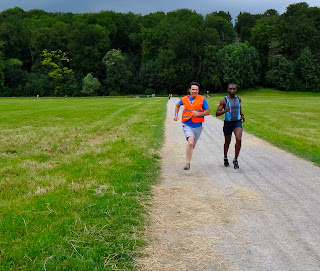 The photo on the left was taking during last night's coached running session with Jeff Grant.  You would be mistaken if you thought the person in the bright orange jacket was a roadside worker who decided to take on one of our group members in a head to head sprint.  He is in fact a fellow group member.

Whilst the jacket may not be a fashion accessory, it has a significance.  The guy (or lady) wearing it is Pacman (or Ms Pacman).

Jeff decided that last night's session would be a good chance to play a real life game of Pacman.  The rules are as follows:

1. You have a Pacman (or several Pacmans) and you have ghosts
2. Pacman wears the fluorescent orange jacket to identify himself/herself
3. The area of play is a square
4. Ghosts run hard back and forth along their allotted side of the square
5. Pacman runs one lap around the square as fast as he can
6. Ghosts may only take rests at the corners of the square
7. Pacman has one safe side of the square where there are no ghosts and he can go a bit slower (if he wants to)
8. When Pacman and ghosts are running in the same direction along one side of the square they race each other to the next corner of the square
9. If Pacman outsprints a ghost he is awarded 2 points
10. If a ghost outsprints Pacman he is awarded 1 point
11. After completing his one lap, Pacman nominates the next Pacman and he then becomes a ghost
12. The person with the highest number of points at the end of a fixed time period wins (although we lost track of the scores)

Basically Pacman is a hard intervals session, disguising itself as a fun game so that you don't even notice how hard you are working. This was exactly the point of the session - when you are really struggling mentally, find a way to distract your mind so that your body can get on with the task at hand unimpeded.  Anyone who has run a marathon or even more so an ultra knows that mental toughness plays a huge part in completing the race.  Physical strength alone is not enough.  So when you are really struggling, try to make the situation seem like fun, turn it into a game, imagine certain colours that work for you (see last week's post mental training with colours) or whatever else it may be.

Last night's session was rounded off with a core workout involving butterfly kicks and reverse crunches.  By that point it was raining (yes Jeff's consistent record of it raining at some point during every single one of his sessions that I have attended was indeed the case again last night), and we got rather wet and muddy.  I am sure Jeff does a rain dance before the session, and asks for rain so that he can increase our mental toughness to the point where none of us even batter an eyelid at a rainstorm anymore.

What will next week bring?  Who knows, but another nice surprise and a fun session from Jeff I am sure. 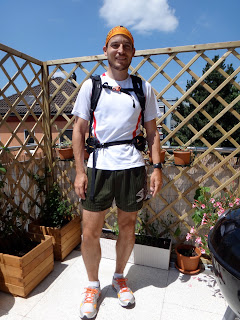 The picture on the left is me before setting off for my run today.  I had planned to run 110km this week, and I realised that to achieve that goal I needed to run 41km today.  Practically a marathon!

The weather was hot and sunny and I left it a bit late really to go out running.  I left in the early afternoon and had to run right through the heat of the day.  Had I planned it well I would have got up early and gone in the cool of the morning.

I took my OMM pack with one bottle of water, my wallet and some energy gels in it, and assumed that I would find more water along the way in the form of drinking fountains or shops.  I headed off along the lake towards Rapperswil, and after 15km I headed up towards Pfannenstiel.  The route took me into the forests, and at least the trees afforded me some precious shade.

I know that I ran an ultra in the Moroccan Sahara a few months ago, but I was acclimated for that and we were given 1.5 litres of water every 10km or so.  The acclimation wore off weeks ago.  I struggled to find water in the forest and I started to become a little dehydrated.  At one point I even considered giving up and my pace slowed to a crawl.  Luckily I soon came across a restaurant selling snacks and drinks, and I stopped there for an ice cream and 3 bottles of soda and water.

The homeward stretch of my run took me along the route of Forchbahn, coming into Zurich down by Bellevue.  It was then just a short jog home.  I am pretty tired right now but at least I completed my aim of 110km this week.

The plan this coming week is take it a bit more easy.  I am thinking of running 5 instead of 6 days, and dropping the milage down to something very reasonable like 80km.  This will give my body a chance to recover ready for a 120km week in 2 weeks time.  Anny will be away in New York this coming weekend, so I may take the chance to do something sporty on Saturday and something relaxing on Sunday.  For Saturday canyoning in Chli Schliere is one possibility as is a via ferrata in Engelberg.  Then for Sunday a spa and sports massage sounds pretty tempting, as does a thermal bath.  Let's see, as this weekend has only just finished.

To round off here are a couple more photos from the run today. 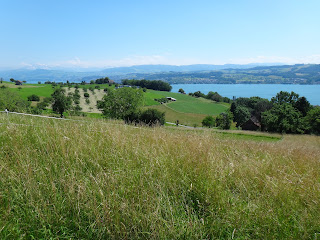 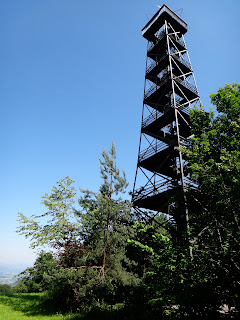 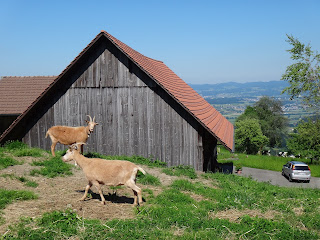