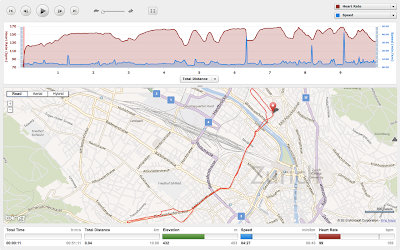 As of yesterday (Monday 3rd September), I am being coached by Jeff Grant of Hillseeker Fitness.  He is going to help me to try to achieve my aim of completing a marathon in under 3 hours.  Up till now, other than the Wednesday night coached running sessions, I have been coming up with my own training plans.  It has worked pretty well (I did manage to complete the Marathon des Sables after all, and did my first and only marathon to date in under 3 hours 30), but my plans sometimes lack direction and focus.  Probably they are not optimised too, favouring quantity over quality.

On top of this, I am entering into an unknown domain - the world of speed endurance running.  At present I am primarily a pure endurance athlete.  I can easily run a marathon and in fact much further than a marathon.  Earlier this year I would run anything up to 70km (with an 8kg backpack) and be back on my feet a couple of days later.  I can also (when needed) run fast for very short periods, but what I cannot really do at the moment is to run fast for extended periods of time.  This is what we mean by the term "speed endurance", and speed endurance is what is required in order to break the 3 hour marathon barrier.  4 minutes 16 seconds per km is a fairly quick pace after all, and this is the pace you need on average to go under 3 hours.

Jeff set me as my first running workout a fartlek intervals run of between 48 and 52 minutes, including the following items:

I was considering to take Negrita with me on the run, but as she doesn't like intervals very much, I decided she was better off at home.  She is much more of a steady pace running dog.  So all alone I hit the streets of Zurich armed only with my tight fitting Adidas tracksuit (more motivation to keep my weight down).

I started with the long intervals as I am used to those most.  Then one by one I ticked the other items off the list.  It was an extremely tough workout, and I barely managed to complete it in the allotted time, and still allow myself sufficient recovery time to get my breath back between each interval.  My total workout time was a shade over 51 minutes, and the last items I completed were the high skipping intervals, as those I was saving for a more deserted part of the city, which ended up being the residential backstreets of Wipkingen.

The sprint intervals were fun, but boy did I get some strange looks sprinting at full speed along Langstrasse.  For those not from Zurich, Langstrasse is where you find all the titty bars and less desirable characters (although plenty of normal people go there too), so a person sprinting along the street at full speed (and I do mean at full speed) may make some people wonder if that person is running away from someone or from the police.

I was also doing one of my fast short intervals close to a roadworks, and realised that I needed to change direction quickly due to an obstruction across the pavement.  I barely made the corner and almost landed in a 1 to 2 metre deep hole.  That would have been a quick end to my sub 3 hour plans.

Right now, one hour after finishing, I feel really energised.  Let's see how much I am aching tomorrow though.  Tomorrow is the usual Wednesday night running session with Jeff at Saalsporthalle, and then on Thursday I am doing my first Crossfit lesson with Crossfit Zurich, having completed the foundation course with Jeff yesterday evening in Richterswil.  I was already aching a little before I started the fartlek interval run from doing all the major lifts and Crossfit moves yesterday with Jeff.

The hot bath is calling now folks, so I bid you all a good evening and may the force be with you.
Posted by fattofit at 12:52 0 comments