Can you run 100km a week without it impacting your work or private life?

This morning I ran to work.  That was 9.29km, including the diversion to drop Negrita off at Central on the way.  At lunchtime I ran 5.84km.  So that was 15.13km in total (all of it in my Vibram FiveFingers), without affecting my daily schedule at all.  The lunchtime run took a shade over 34:59, so by the time I showered and grabbed some food from the kiosk, I was only away from my desk for just over 1 hour (the same amount of time as if I had taken a normal lunch).

What today has made me realise is that if I run to and from work, or if I run just one way and do a lunchtime run, I should easily be able to fit in 100km of running per week (including one long run on the weekend).  That would be the same amount of running I was doing to prepare for the Marathon des Sables.  I don't think I need to do more training for the Ticino trail than I did for the MDS, since the Ticino Trail is only a one and a half day race.  However, I will have to find a way to train for the 8,500 vertical metres.

It is also reassuring to know that I should be able to prepare very well for the MDS 2015 without the need to take another sabbatical.  Do you find that you are able to fit in large amounts of running without the need to sacrifice anything?  Or do you struggle to get in the mileage that you want each week?
Posted by fattofit at 11:10 2 comments

Downward facing dog - one of my favourite yoga positions 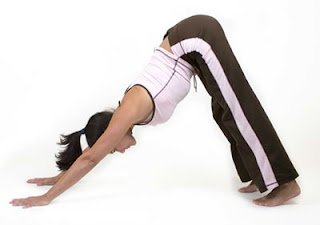 I have not been in downward facing dog pose since I left UBS for my sabbatical back last August (at least outside of the bedroom that is).  I am not sure what it is about the position but I feel great when I am in it.  It really stretches out my hamstrings and calms me down.

Today I restarted my yoga classes at UBS.  The teacher is the same one as before and the people in the class were mostly the same ones I remember, although not as many of them now it seems.  The fitness class schedule is changing weekly at the moment, and some people may have forgotten when yoga had due to take place.  On the timetable last week, yoga was meant to be at 1pm, but I later found out it had been changed to 12.30pm and the timetable had not been updated.  Luckily there is a mailing list you can join to be informed of changes or cancellations and I have been added to this list now.  This week we were informed via the mailing list that the class had been changed to 12.45pm.

In spite of all the timetable changes, it was a lovely class and I was happy to be doing yoga again after such a long break.  I did several classes of hot yoga before I left to Morocco, but hot yoga and standard yoga are rather different.  Hot yoga is more of an intense workout but not as relaxing as standard yoga I find.  I would like to do both simultaneously and get the combined benefits.  The only issue with the hot yoga is that getting to the class is not as easy as attending the standard yoga at UBS.

In general I was able to stretch much further than I could last year, with the exception of my hamstrings.  The range of motion in my shoulders and back has increased (most likely through Pilates) and there are some moves where my belly used to get in the way before, where it no longer can (since I don't have a belly now).  The endurance factor is not quite there yet and there were times when I could not hold the poses for the full duration, and needed to rest.  That should come rather quickly from attending the sessions regularly from now on.  My body awareness has definitely increased.

Overall verdict: thumbs up!
Posted by fattofit at 12:24 0 comments

Email ThisBlogThis!Share to TwitterShare to FacebookShare to Pinterest
Labels: yoga and pilates

"Coming out" as a barefoot runner

Up till tonight I only had two barefoot runs under my belt.  Both of those were on the Finnenbahn in Irchelpark, and they were very short.  I felt like a challenge tonight.  No longer did I want to hide from the strange stares that one expects to get when barefoot running on the streets.  It was time to get out there and run barefoot in public, with my head held up high.  I decided I would officially "come out" as a barefoot runner.  It is nothing to be ashamed of.  In fact it is more hardcore than shod running.  I could also argue that I am saving the environment ever so slightly, because it is one less pair of socks to have to wash :)))

I had two companions with me on my run.  One was Negrita and the other was my iphone, allowing me to take some short video clips whilst running on different surfaces.  The first part of the run was on asphalt and that was no problem for my feet except for one section where a lot of small twigs had fallen on the pavement and I had to pick my way gingerly over them.  Once I reached Irchelpark I joined the Finnenbahn, so the surface then was composed of wood chips.  They are a little more challenging to run on than asphalt, but also more stimulating for the feet.  Next came the grass.  That was my favourite surface as it was softer than asphalt and woods chips for my feet, yet still stimulating for them.  You do have to be careful in the long grass though, as it would be easy for pieces of glass and dog excrement to be hidden amongst the blades. After the grass I tried a section of gravel/ small stones.  There is no other way to describe that surface than painful, at least until my feet toughen up.  I left the stony section as quickly as humanly possible and reverted back to the asphalt for the return journey home.

Whilst I did see some people on my way to and from the park, and whilst several people did look down at my feet briefly, I did not get the strange comments or really intense stares I had been expecting.  I am sure I could get those by running barefoot down Bahnhofstrasse if I wanted (note to self for something to do when I am feeling I am not getting enough attention).

Below are some short video clips I took tonight whilst running: