The Nike Tempo 2 in 1 running shorts got me through the mighty Marathon des Sables without any chafing and in complete comfort, so if you were expecting a bad review then you have probably come to the wrong place.  If on the other hand you are looking for a really decent pair of running shorts then read on.

The Marathon des Sables is a 7 day race through the Moroccan Sahara in scorching heat, with competitors covering on average just under a marathon a day on rough terrain and sand.  You need a pair of shorts that will keep you dry and prevent chafing, be comfortable and ideally not smell terrible after a few days of continuous use.  I only took one pair of shorts with me for the whole 7 days, and although they did not smell fresh, I was surprised how little they did smell.

The short uses Nike DriFit technology to wick moisture away from the skin.  This helps you to remain comfortable and dry and prevents chafing.  I would highly recommend these shorts to fellow runners and sports people, and I will be wearing them myself in Trail Ticino and in any other ultra races I do in the future.

If you do wish to purchase the shorts you can do so from the links on the right hand side of my blog.  This will earn me a referral fee from Amazon.  Please note that I will never recommend products that I do not like.  For me, my moral integrity always comes first.
Posted by fattofit at 10:54 0 comments 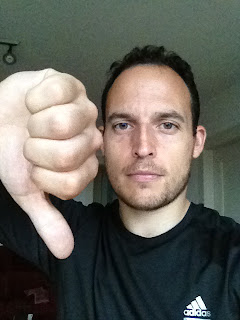 Tonight was the last of Series 4 of the Wednesday night running sessions with Jeff.  At the beginning of series 4 we did a benchmark run of 1,520m around the sports fields near the Saalsporthalle and then up a short hilly stretch of the Uetliberg to the finish.


Tonight being the last session of the series we redid that same test, and my time was actually 7 seconds slower than it was 6 sessions ago, despite some serious training in between.  Hence the big thumbs down to myself in the photo on the left.  As soon as we got to the hill, my legs just felt as heavy as lead and there was no power in them at all.

It must be said that I have not been feeling great all day.  I have had a headache and nausea since I woke up, and it was very difficult to concentrate at work.  I haven't been feeling that good all week though.  Words I would use to describe how I have felt is sluggish, tired, aching, feeling like I need more sleep.

It could be just that I need a bit more sleep or that I have caught a 24 hour virus, but it could also be the early warning signs of overtraining.  Overtraining is something to take very seriously, because if you ignore the early warning signs it can take months to recover fully.  I will monitor myself closely over the next few days, and see if my energy levels start to come back up after resting a bit more than usual.  If they don't I will have to make an adjustment to my training plan, as next week was intended to be a very high mileage week, my last one before the Trail Ticino.  If necessary I can always back off the mileage a bit and put in some cross training sessions instead.  Till now I have always been able to know when I am on the verge of overtraining and stop it from developing into something more serious.  I hope that same self awareness continues.
Posted by fattofit at 12:20 0 comments 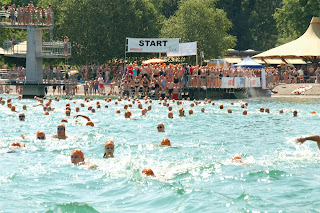 Tomorrow afternoon I was planning to take part in the Zürichsee crossing.  This is a fun event that takes place once a year in Zürich, and involves participants swimming from one side of the lake to the other (from Strandbad Mythenquai to Strandbad Tiefenbrunnen), covering a total distance of 1,500 metres.

The event was originally planned for the 4th July (tomorrow), but in order to get the go ahead from the water protection police, the water temperature must be 21 Celsius or over.  Unfortunately, due to the bad weather as of late, the water is not yet warm enough.

The next scheduled date for the crossing to take place is the 11th July, and if the water is still too cold then it will be postponed till the 22nd of August.

I am not really a mega swimmer, but I should be capable of such a feat if I take my time about it.  If the event goes ahead on the 11th July, hopefully I will be able to take part in then.  I last went to the swimming pool around 6 months ago, and swam 1,500m then without problem.  I may try to take my blow-up duck with me, just in case I need a rest.  Armbands might make me appear a little too novice.
Posted by fattofit at 10:29 0 comments

Today I was originally meant to be going canyoning in Chli Schliere.  The meeting point was Alpnachstad station at 8am.  When I woke up at 5am I looked outside and saw massive thunderheads looming overhead, and soon after the tempest came.  It did not look like the canyoning would be able to go ahead.

The problem though was that the company I booked with did not have my mobile number, only my work email.  Without my remote login details I was unable to check my work email and had no way to know whether the trip was taking place or not.  The phone number listed on the company website was the office number and not a mobile number.  I sent the company an email from my hotmail account providing them with my mobile number, and hoped that they would somehow reply in time before I set off. When no reply came I decided to get on the train and go to the prearranged meeting point regardless, just on the off chance that it would still take place.

Half way to Lucern I got an SMS from the outdoors company saying that the trip had been cancelled due to high water levels in the canyon and that they had sent out an email to my work account the previous day.

I already had my train ticket and I had already got up nice and early so that the whole day lay ahead of me.  So I decided that I would continue on to Alpnachstad and then run up Pilatus.  For those of you not from Switzerland, Pilatus is a mountain that is 2,132 metres above sea level.  It is also the location of the world's steepest cogwheel railway (the Pilatusbahn), reaching a maximum gradient of 48%.

The path that I took starts at exactly the same point as the cogwheel train departs, and follows it more or less to the top, except that the path weaves to and fro much more than the railway, as it would be pretty hardcore to have to climb an incline of 48% on foot.  There is a sign at the bottom saying that it should take around 4 hours to hike to the top, so I decided that my challenge would be to run to the top in under 2 hours.  There were not many other people on the path, most likely due to the unpredictable weather, but it did not rain at all whilst I was climbing and the mist made it refreshingly cool.  It would have been much tougher to climb it yesterday when the temperature was over 30 Celsius.

I found it pretty tiring, but I achieved my aim and arrived at the top in under 2 hours.  I ran for all except the last 10 minutes.  Near the top I met a guy who seemed to be climbing pretty fast, and when we were both standing on the top he asked me what event I was training for.  I told him that I was training for Trail Ticino and he told me that he was training for the Jungfrau Marathon.  I would have been happy to talk to him more and compare training regimes etc but he only spoke Schwizerdütsch, so that limited our potential conversation somewhat.  Before leaving he did want to know how long it took me from bottom to top though, and it turned out it took me 30 minutes less than it took him.  He said that he does a normal marathon in 3:15, so that does give some hope maybe of doing the Lucern marathon in sub 3 hours, although running up Pilatus and running a normal marathon are completely different beasts.

The total vertical distance covered during today's run up Pilatus was 1,635 metres.  That is basically only one fifth of what I will have to do in the Trail Ticino.  It makes me scared even thinking about it!

The moral of today's story.  Next time you find yourself in what appears to be a "shitty situation", try to turn it on it's head and make it into something positive.  Coach Jeff would certainly be happy with the approach I took today, as he is always emphasising the above point in his mental toughness training exercises.

I will have to try and apply the same approach to shine a positive light on the fact that today's storms battered the hell out of the plants on my balcony, with it now looking like a scene from Armageddon out there!