Reward for anyone who finds my lost belly

Sometimes things really sneak up on you without you noticing.  I was doing yoga at work on Tuesday lunchtime and suddenly when I looked down I realised that there was no belly obscuring my view.  I am not saying that I have a six pack by any means, but no-one in their right mind would call me fat now.   So I got on the scales just to check, and I am now down to 83kg.  Of course this figure varies slightly throughout the day, but that still means I have lost over 3kg since I started this blog a couple of months back.

I should have done one of those before and after shots with a half naked torso to really see the difference, and posted them here, but maybe that wouldn't be such a good idea anyway considering all my colleagues now know about this blog, since it is linked to my fundraising page.

Anyway, in summary I am feeling great and really starting to notice the difference all this training has made.  Only thing that still concerns me is my knees are both a bit sore, especially my left one.  Hence tomorrow will be another well earned rest day, having done yoga and hill training on Tuesday and then running at lunchtime today.  When I see the sports doctor on Monday about my knees I will ask him if I should still be training for the Zuri marathon in April.  If he says I need to take a break then I will do so, as it is better that if I have to I miss the Zuri marathon than risk a more serious injury which may set me back longer term.  I have plenty of time between now and next year to recover, and build up plenty of strength in my knees and accustom them to long distance running.  At present though the Zuri marathon is still on my agenda.
Posted by fattofit at 15:01 0 comments

The tortoise and the hare

Most of us will know the story of the tortoise and the hare.  The hare thinks he is the fastest animal and challenges the tortoise to a race.  They start the race and then as the tortoise is so slow the hare decides to eat some breakfast.  This makes him a bit drowsy, and so he takes a nap.  Meanwhile the tortoise plods slowly onwards without pausing.  When the hare wakes up he sees the tortoise is almost at the finish and sprints as fast as he can, but it is too late, as by the time he gets there the tortoise has already crossed the line.

This weekend I went cross country skiing in the Goms valley, and it was a bit like the tortoise and the hare for me at first.  I set off at a good speed and flew past the grannies and grandads, but after a while I needed a break as I was blowing harder than a steam train.  I continued like this for a while, stopping and starting, stopping and starting, thinking that my progress was quite good.  Then you guessed it, the grannies and grandads passed me slowly by and disappeared bit by bit into the distance.  That was the first day.

Then today I decided to take the tortoise approach.  I took much fewer rest breaks and paced myself well.  All in all I think this approach was the best as the progress was good and I arrived at the finish to feel like I could still row out a 5000m on my indoor rower.  And guess what, I did just that when I got home. 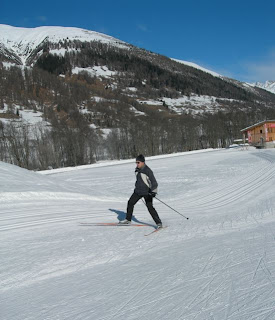 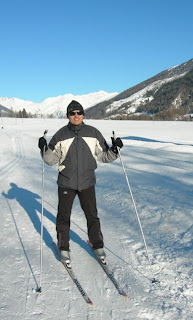