I find my way out of the Black Hole I was stuck in, and Anny completes her third race to date 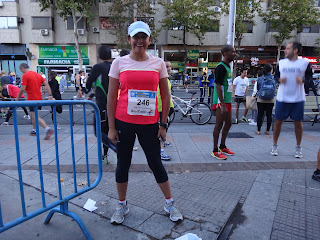 Well howdy everyone.  It really has been a while this time, but I didn't forget you one bit I promise.  I could try to spin you some yarn about being stuck in a black hole and only just finding my way out, but the truth is that I was on holiday in Spain and Portugal with Anny and I do have to apologise for not updating this blog in the last 2 weeks.

First of all we attended a wedding in Madrid, which turned out to be a lot of fun and then we headed all along the Argarve coastline by car, stopping at various places along the way.  It was nice and relaxing, and the weather was more like summer than autumn, but I also made sure to keep up with the training that Jeff had entered into my online coaching plan.  Between the training, the travelling and needing some rest though, I didn't really get that much time for blogging I am afraid.

After getting back from Portugal we stopped off again in Madrid for a few days.  Whilst we were there Anny did a 10km race around her barrio (neighbourhood).  The race took place last Sunday.  If you were following the news you will know that Spain recently had an unprecedented amount of rainfall, especially in the South.  Well Madrid was not immune and it also rained there, without letup, for several days in a row.  Anny was very lucky though it seems, as Sunday was a gloriously sunny day with barely a cloud in sight.

The race started at 9am sharp, and there were around 800 people on the start line.  Anny started somewhere in the middle of them.  I advised her not to start at the front and end up going off too fast and not to start at the back and have to fight her way through the crowd for the first few minutes.

She was hoping for a time under 1 hour and as my watch started to show 55 minutes my anticipation grew and everyone who was wearing a pink shirt on the horizon I thought might be her.  Then shortly afterwards I saw her familiar big smile and she upped her pace from there all the way to the finish line.  Considering how tired some of the runners around her looked, she looked as fresh as a daisy and I am sure she is capable of shaving several minutes off her time just by pushing herself harder, without any additional training.

Her final time was 56 minutes 34 seconds according to my Garmin.  She was really happy with that and so were her family and I.  She is actually following a half marathon training plan at the moment, so she is almost ready to do a half marathon.  If she could do that under 2 hours that really would be fantastic.  Some of my colleagues are also beginner runners, and they recently ran a half marathon around the Greifensee in just over 2 hours.  It seems the world, well the world around me at least, is running crazy at the moment. 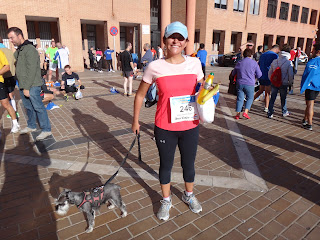