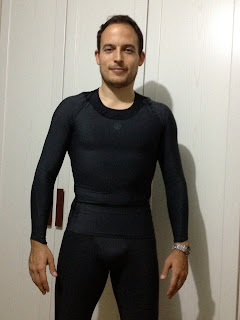 I have seen a lot of positive reviews about SKINS compression clothing.  SKINS offer both active wear compression clothes (for use during sport) and recovery compression clothes (for use after sport).  Some of the guys who were running alongside me in the Marathon des Sables 2012 were wearing SKINS recovery clothes in the evenings, and some of the CrossFitters that I do classes with wear SKINS leggings or SKINS socks to the classes.  Since everyone else is at it, I thought I would give them a go, and last week I purchased a pair of SKINS RY400 leggings and a SKINS RY400 long sleeved top.

When I woke up on Monday morning after going to sleep in the RY400s, I only had a very mild ache in my calf muscles.  In fact it was more of a tightness than an ache.  It is too early to say whether that was thanks purely to the SKINS, and I would like to do some tests with and without them after doing similar workouts and compare how I feel the day after on each occasion.  For now though I will give them the benefit of the doubt, as I was feeling much better the day after than I was expecting to.

"When you apply compression to specific body parts in a balanced and accurate way, it accelerates blood flow. This gets more oxygen to your working muscles – and boosts your performance.

Better blood flow also helps your body to get rid of lactic acid and other metabolic wastes – which helps you work at a higher rate for longer. Plus, improved oxygenation reduces the effects of delayed onset muscle soreness and accelerates muscle repair. So engineered gradient compression and dynamic gradient compression play a big part in helping you recover from exercise too."

This jury is still out on whether they boost performance, but they seem at first glance to aid recovery, so I want to give them a go during exercise and see if they give me any performance boost.  I plan to purchase some SKINS A400 leggings and a a SKINS A400 long sleeved top for use when running.  I will let you know how I get on with those in due course.  In the meantime though, I will be sleeping in my RY400 leggings and top after each tough workout.

Tomorrow should be another good opportunity to see if they really do aid recovery, as today I did a CrossFit class with lots of American style kettlebell swings.  The last few times I have done kettlebell swings I have had serious DOMS in my lower back the following day.  So let's see if I get any DOMS in my lower back tomorrow after having slept in my SKINS.  Nighty night for now.