The High Ropes Course of Kloten 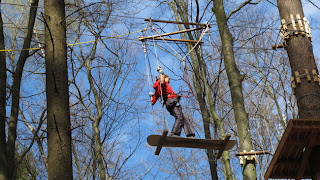 As you may now have realised by all the information contained on my blog, Zürich (well Switzerland in general) is abundantly rich in fitness activities and things to do.  Well not far from Zürich airport, in the village of Kloten, lies a high ropes course or Seilpark as they call it in German.  I went there for the first time last Thursday with a couple of friends and we had a lot of fun.

After an initial briefing we were kitted up with a harness, carabiners and a flying fox and shown how to move along the course, by means of a mini course that they use for the demo part, and which is only 1m off the ground.  Attached to your harness you have 3 pieces of equipment.  You have one cord with a flying fox attached and two cords with quick release carabiners attached.  At various points all along the course they put a red mark on the steel rope to show where you should clip the carabiners.  Then there are blue marks to show you when you should use the flying fox.  The flying fox is used for sliding down the rope or traversing a horizontal section when there is nothing to stand on below.

We had to show that we were able to move safely along the mini course, before they would let us onto the main courses.  This part is really important, because there are no guides/ instructors on the course with you at Seilpark Kloten.  It is a course where you are responsible for your own safety.  Some of the highest parts of the black course are 15 metres above the ground and a fall could if you were unlucky kill you.  They do however have one or two instructors on the ground who can assist you if needed.

The golden rule is ALWAYS HAVE AT LEAST ONE CARABINER ATTACHED TO THE STEEL ROPE.  You do have to concentrate a little, as with constant clipping and unclipping it would be rather easy to become completely unclipped if you were not paying attention.

One of my friends was with her child so she stayed on the childrens' course.  My other friend and I started with the blue, which we completed without any problem.  You do need some degree of balance but in terms of height, the blue course is only 3 to 5 metres above the ground and does not seem high.

Unfortunately my friend was not feeling well.  She had a headache and was feeling dizzy, so after the blue course she waited on the ground while I went to the red course.

The red course is 5 to 9 metres above the ground, so seems much higher.  It demands more balance than the blue one. It also includes some extremely cool games like a snowboard.  You need to clip onto the cage that houses the snowboard and then jump onto the snowboard and push off towards the other platform.  The course ends with something that forces you to put your trust in the equipment.  It is a machine that you clip on to, then you sit down on the platform and just push yourself off into thin air.  After a very brief fall, the machine releases a rope very slowly so that you have a controlled descent.  That first moment until you see that the machine is working is a little scary.

After finishing the red course I decided I would have a go at the black course.  It looked pretty high and goes up to 15 metres.  The course description says it is for 007s.  It demands a lot of power and endurance, and to even start it you have to climb vertically some metres up a rope, which has circular discs on it to make things even harder, since they get in the way.  After that you can rest briefly on a platform before the next test of strength.  You have to haul yourself up a kind of wooden ladder, but the distance between the rungs is huge and it is far from easy.  After that you have to traverse a set of monkey rings.  After finishing those my arms felt dead, but somehow I managed to muddle on through the rest of the course and finished it.  The black course also ends with the braking machine.

I got a huge sense of satisfaction from completing all the courses, and am keen to try something even tougher.  Now that I have my 007 status that is!

I definitely recommend Seilpark Kloten as a fun day out for all, provided you have at least some head for heights that is.
Posted by fattofit at 10:40 0 comments