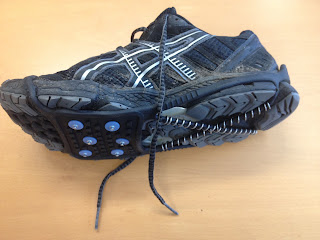 If you read my last post, you will remember that I mentioned one of my colleagues took a tumble on the ice whilst we were out running last Friday lunchtime.  Whilst he didn't hurt himself too much, he wasn't about to take any chances yesterday it seems, and he came into work with the rather interesting looking devices pictured above.

They are basically like a spike and snow chains combined, and you slip them over your normal shoes.  On the front section you have a rubber plate containing small spikes and on the rear you have what resembles snow chains.  Snow chains are sets of chains that you attach to your car tyres in really snowy conditions when the roads are too treacherous for standard winter tyres.

I asked him how the run went wearing them, and he told me that they gave him a lot more grip than usual.  Grip in the forward direction was great he said, but in the lateral plane his heel did still slide from side to side a bit.

My colleague picked them up from his local Tschibo store, but a quick search revealed that there are several manufacturers also selling them online.  In the UK for instance I found the following link http://www.yaktrax.co.uk/

The advantage of these over standard spikes is that you can wear them over your normal shoes, making them a cheaper and possibly more comfortable option.  They are also fairly light and compact, so you can slip them in your day bag.

It is the first time I have ever seen such a device, but I can imagine them becoming increasingly popular if the snowy weather continues as it is here now in Switzerland.  The elderly in particular could find them extremely useful.
Posted by fattofit at 03:07 2 comments

Treadmill vs. outdoors running - which is faster? 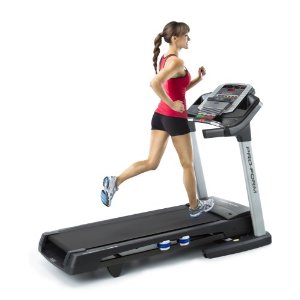 Due to the abundant snow and ice on the roads and pavements of Zurich, today I was forced to do my 10 mile tempo run on the treadmill.  I was considering to do it on trails, but on Friday when I went out running with my colleagues we almost slipped over several times on the gravel trails (one of us did actually take a tumble), due to ice patches hidden by freshly fallen snow.  The last thing I want with my marathon next weekend is to get injured, so the treadmill it was.

The only gym I am a member of is the one at UBS, which unfortunately is closed at weekends.  So I paid 25CHF to join Anny as a guest at Airport Fitness, where she is a member.  All the treadmills were taken when we arrived, but after 5 minutes  of waiting one became available.

Imagine my surprise when I found I was getting tired after only 30 minutes or so.  I even had to lower the speed slightly to give myself a bit of a break.  It wasn't as if I am sick or feeling run down.  I feel just fine and dandy.  That brings me nicely on the to the title of this post - Treadmill vs. outdoors running - which is faster?

I would say based on my experience today, that for me personally, outdoors running seems faster.  I am able to maintain a much better pace on the road.  I started googling a bit, and it seems I am not alone with thinking that road running is faster (there were very few people who seemed to suggest the inverse, that treadmill running is faster).  There are several reasons I can imagine for this perceived difference:

1) having the ground slipping underneath your feet is not the same thing as having to propel yourself forward, so different muscles will be used
2) those with short strides may find they have to keep a really high leg turnover on the treadmill to do the same speed as they do on the road (treadmill running would seem easiest for those who have very long strides and spend a lot of their time in the air rather than on the ground).  I think that I have fairly short strides and a high cadence, so I found my leg turnover on the treadmill very high
3) on a treadmill you do not have air blowing over you to cool you down the same as you do when running outdoors (a small fan is not the same as an outdoor breeze and the cooling effect of air resistance)
4) the treadmill often has springs in it to absorb some of the impact, so you do not get the same propulsion as you do when pushing off a hard surface like asphalt
5) running outdoors is more stimulating for the mind, so maybe your perceived exertion is naturally lower

I would be really interested to hear what others think.  Do you find you can do better times on the treadmill or when you are running outdoors?

Before signing off I would like to share one interesting piece of information I found during my search.  Apparently treadmill running is great for improving running efficiency, as when running on the treadmill we naturally try to conserve as much energy as possible.  So even if you favour outdoor running, that may be one reason to consider a treadmill workout from time to time.
Posted by fattofit at 11:01 0 comments