Laughing your way to better health with Laughter Yoga 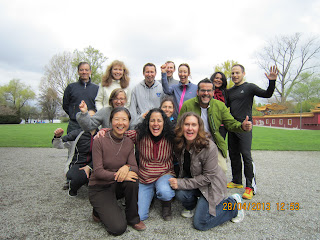 Always wanting to try new and interesting things, this morning I took part in a laughter yoga workshop in Zurich.  The skies had been threatening to open up, but fortunately it stayed dry throughout the workshop, which took place outdoors, in front of the China garden down by the lake front.

In the words of the organiser:

Laughter Yoga is a unique concept where anyone can laugh for no reason, no jokes or comedy.
We do group laughter exercises and with eye contact the laughter gets contagious and real.
It is based on a scientific fact that the brain cannot differentiate between real or fake laughter, therefore the body gets the benefits anyway.
This concept was created by a Medical Dr. Madan Kataria in Mumbai, India with only 5 people, today you can find more than 1000 Laughter Yoga Clubs in more than 72 Countries.

Not only does it improve your mood, but laugher also strengthens your immune system and helps you connect easily with people.

Fifteen of us took part in the workshop and as is usually the case in Zurich the group was truly international with participants from Australia, UK, Russia, Czech Republic, Poland, Switzerland, Italy and Germany, as well as a significant number of Venezuelans (who were friends of the organiser).

We started off with a series of breathing and stretching exercises, which included blowing up balloons and blowing bubbles.  The idea with the bubbles was that whilst some members of the group blew bubbles up into the air, the rest tried to blow the bubbles downwards towards the ground.  It was like reverting back to childhood for a few minutes and was lots of fun.

Afterwards we moved on to the actual laughing exercises.  These involved chasing after each other whilst laughing, hugging other group members whilst laughing and many more activities (whilst laughing).  Each time we were told to maintain eye contact, as this keeps the group laughter going.  It must have been obvious that we were having a lot of fun, because a passer by actually wanted to come and join in with us, and in the true spirit of laughter yoga she was warmly welcomed into the group.  The other important point we were told is not to stand in a circle as that is too formal and tends to make people feel a little intimidated.  Instead we were always asked to form a kind of circle, but with some people inside to break the formality.

Like many other people, I am sometimes uncomfortable with laughing randomly or too loud, due to breaking a perceived social etiquette.  The workshop provided a comfortable environment where a really open group of people were able to open up and laugh uncontrollably without fear of being judged.

Laughter yoga is something I would be interested to try again, and the organiser Fabiola is so full of positive energy that you cannot help but want to be around her, smiling and laughing.  See here for more info.
Posted by fattofit at 09:30 0 comments