New marathon PB of 3:18:06 in the beautiful Italian city of Pisa 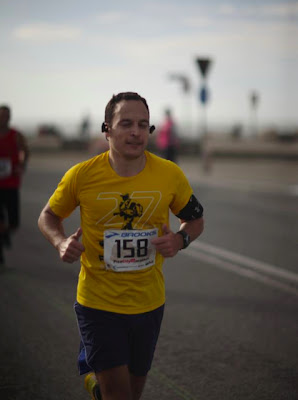 They may have the best pizzas and pastas in the world, they may have one of the most romantic and melodic languages there is, but the Italians don't seem to have a great public transportation system (no offence intended).  I almost didn't make it to Pisa for the Pisa City Marathon on Sunday!

I left Zürich on Friday night and took the direct train to Milan.  I stayed in Milan overnight and then took the direct train to Pisa at 8:10am.  I was meant to arrive in Pisa at 12:21pm, which would have given me plenty of time to relax, hydrate, carbo-load and mentally prepare myself for the marathon the following day.  Only it turned out that there was a fault on the line and the trains could not make it to Pisa.  I don't want to distract from the main subject of this article, so suffice to say that 14 hours after I first left Milan I finally arrived at my hotel in Pisa, slightly dehydrated and very hungry.  It was not the greatest marathon preparation that I could have wished for.

I woke up rather tired at 6am on Sunday morning, got some breakfast, went to collect my race number and then went back to sleep for an hour.  The race was due to start at 9am, so by the time that came round I was wide awake, with a case of pre-race jitters.  I was still trying to decide my strategy in the moments before the race.  If you recall, my estimated marathon time was between 3:10 and 3:15 based on race time predictor tools I found online, and the fact that I recently completed the Ticino half marathon in a shade over 90 minutes.  Nevertheless my real end goal is sub 3.  So the 2 strategies I was torn between were:

1) follow the 3:00 pacemakers and give it my best with the risk of blowing up
2) play it safe and follow the 3:15 pacemakers, but wondering if I could have done more

I am not really one for playing it too safe, and I had put a lot of time and effort into my training, so I decided strategy one would be my choice.  It was a risk, but a risk that I was willing to take.  When the race started I tucked in behind one of the 3:00 pacemakers and tried to conserve as much energy as possible by letting go of any unnecessary tension.  The pace did not seem that crazy and I am used to running much faster than that during my interval and tempo runs, but I was not sure that I could keep up the pace the whole 42km.  Only time would tell.

As the kilometres passed, the 3:00 pacemakers started to pull slightly ahead.  I realised that the pace was not maintainable and I eased off slightly, although they were still in sight for a long time.  I passed the half way point in 1 hour 32 minutes and 30 seconds, so although sub 3 was no longer a possibility (given the fact that I was starting to get tired), a really good time was still possible.  After 25km had passed, my pace started to slow significantly though.  It was a little demoralising that I was now in no mans land between the 3:00 group and the 3:15 group, and I had no one to tuck in behind.  I always prefer to follow someone when possible, as it helps me to pace myself better.  I can also switch off mentally and not have to focus on my Garmin watch so much.

The kilometres between 25 and 35 were tough ones for me.  My pace slowed by over 1 minute per km, and I even had to walk for a minute or two at one point.  The walking helped though and when I started running again I felt a renewed sense of energy and motivation.  The 3:15 group had already passed me by now, but I decided to dig in and finish as close to 3:15 as possible.  I started to remember all of Jeff's mental toughness training tricks, like running in honour of someone or picking someone as a target and running them down.  I tried both of those and they worked rather well.  In the final few kilometres I started to pick off quite a few people.

Now there was less than 1km to go.  A rather muscular guy passed me, and I thought to myself no way is that bulky guy going to beat me to the finish and stepped up my pace.  In the last 500m I was really flying and I think that extra kick came as a result of all the strength training that Jeff got me to do.  The fast twitch fibres were finally able to take over from the fatigued slow switch fibres.   I finished up with a cracking pace of 3 minutes 7 seconds per km (19.25km/h).

My final time was 3 hours 18 minutes and 6 seconds.  Not quite what I had been hoping for, but a new PB by almost 12 minutes, so certainly nothing to cry about.  Now I need to give that sub 3 a crack next spring.  There is still plenty of time I can knock off by more even pacing and spending more time on my feet.  Let's see if Jeff and I can get our heads together and come up with a kick ass sub 3 plan for next year.
Posted by fattofit at 10:47 0 comments