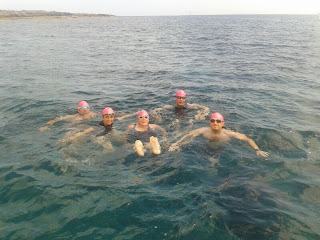 Having arrived back from my SwimTrek holiday in Mallorca over a week ago, I thought it's high time now to write a summary/ review.

This was the first swimming holiday that I have been on, and I decided to book it after reading the following article in the Guardian newspaper "Top 10 swimming holidays".  The trip was a speciality open water swim coaching holiday, and it was held from the 21st to the 27th June 2013 in Colonia de Sant Jordi, Mallorca.  SwimTrek is one of the leaders in open water swim holidays, and their trip managed to live up to all my expectations.

I have been on organised sports holidays before, such as the Vuelta Sudamerica bicycle trip with Tour d'Afrique.  This was the first sports adventure holiday though where I was not moving from one camp to another night after night, and where it afforded a high degree of comfort rather than feeling much like life on the road.  Travelling from place to place can be fun, but also there can be a time and place for staying in the same hotel for a week, allowing you to do laundry, relax and so on.

Colonia de Sant Jordi is a rather small, quiet town on the Southern coast of Mallorca.  If you are looking for a clubbing holiday then it isn't really the place to go.  That kind of thing you would be better off going to Magaluf for.  If on the other hand you are looking for a swimming holiday, Colonia de Sant Jordi is jam packed full of swimmers.  Part of the reason for that is the presence of the BEST Swim Centre in the town - a mecca for youngsters looking for a gap year that includes a chance to hone their swimming skills.

On Friday 21st I got to meet the rest of the group and the coaches for the first time.  The two coaches on the trip were very experienced coaches.  Glen is from the UK and Kelly is from the US.  Glen is a gadgets man and can talk the hind legs off a donkey if it involves swimming technique or gadgets.  Kelly is both a swimming and water polo coach and is specialised in open water swimming.

What I was really impressed by, is how well everyone in the group got on.  There were some minor tensions amongst one or two of the people who shared rooms, but other than that everyone got on like a house on fire.  As in any group you always have one or two quiet ones, but once you get them talking it is fine.

Everyone was coming to try and improve their swimming technique, but it seemed I was the only one coming with the boot camp approach in mind.  For most it was a chance to swim but also to relax too.  With my 26k August swim always in the back of my mind, there is not that much time for me to get too relaxed although I did my best.  A mojito or two helped the relaxation process along.

There was even one guy in the group who had successfully summited Everest.  Anyone who has done that gets a lot of respect from me.  He was also training to swim across the English channel as part of a relay team, where swimmers swim for one hour at a time and take it in turns to swim until the channel has been crossed from the English to the French side.

The coaching itself was fantastic.  On the first day we did some video analysis of our strokes above and below the water, as well as head on.  That same video analysis was then repeated at the end of the trip to see what improvements we had made.  In general almost everyone made some improvements in terms of maintaining the same speed and managing to reduce their stroke count, or even managing to swim faster whilst reducing their overall stroke count in some cases.

The video analysis revealed that I was wasting huge amounts of power in my stroke.  I was creating lots of white water, windmilling my arms, and generally thrashing.  So throughout the week Kelly and Glen helped me to swim smoother and more efficiently through the water.  It was not a complete success as I am still prone to thrashing through the water, but when I am paying close attention I am able to swim nice and smoothly.  Maybe with some months of practise it will become second nature.

I liked the coaching so much in fact that I persuaded Kelly to come up with a plan to help me prepare for my 26k Rapperswil to Zürich swim on the 4th August.  She will also be coming out to Zürich to kayak alongside me and to give me support and advise, as well as food and water.  In addition I will be joining her in Slovenia to do my mandatory preparation swim for the race.

A typical day consisted of a morning swim in the sea and then an evening swim in the pool to practise technique drills.  On average we covered from 3 to 4km per day.  The day before last was the day of the long swim, when we did both swims in the sea, stopping only for lunch and a nap on one of the beaches.  I would estimate that the long swim day, most people covered around 5 or 6km, but I chose to continue swimming from the end point of the swim right back to the hotel and probably covered somewhere close to 10km.

Colonia de Sant Jordi has some lovely sandy beaches and lots of little islands, which make for some really interesting swims.  Each sea swim we did was scenic and I loved the fact that we could always see the sea floor.  I always get a little bit nervous swimming over the deep blue and not knowing what is beneath me.  On this trip I didn't have to worry about that at all.

The trip was a memorable one for me, because of the location, the group, the coaches and the coaching.  This is one trip I would be happy to go on again at some point in order to hone my technique further.  Whilst we were there we stayed at the Hotel Lemar, which was comfortable, with friendly staff, and ideally located right next to the beach.  One hundred metres from the hotel and you are already in the water.  If I had to give a rating out of 10 I would give it 9.
Posted by fattofit at 10:00 0 comments