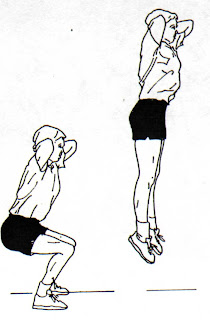 Plyometrics or "plyos"  is a method of training muscle elastic strength and explosiveness to enhance athletic performance.  The term plyometrics was coined by Fred Wilt in the 1970s/1980s after watching Soviet athletes training for track and field events, but the method itself had been around since the late 1960s/ early 1970s (known then as the "shock" method and credited to Yuri Verkhoshansky).  The idea behind plyometrics is to induce an involuntary eccentric contraction (as the athlete lands from a height) followed shortly afterwards by a concentric contraction as the athlete jumps upwards.

The depth jump is part of the original "shock" method used by the Russians in the 1960s.  To perform a depth jump the athlete jumps or steps off a box and prior to landing he pre-activates his muscles in anticipation of the impact.  On landing he bends his knees slightly to absorb the impact and then he jumps immediately upwards again.

My use of plyometrics

At this stage in my sub 3 hour marathon training I am trying to focus on improving my speed endurance, and in addition to interval sessions and tempo runs, plyometrics training is another method that I am experimenting with.  My core weekly routine at present consists of one 30 minute tempo run, one intervals session (or Yasso 800s), one plyometrics and strength training session, one long run (currently building upwards from 15km) and one Pilates lesson.  The rest I play by ear.

The plyometrics exercise that I used in my strength training routine on Monday was the squat jump.  Having read more about plyometrics, as of next week I will alternate between squat jumps and the depth jump.  The former is a slow SSC exercise and the latter is a fast SSC exercise.

Plyometrics training is not for everyone.  For a start it is not suitable for people with knee or hip problems, due to the high shock forces involved.  It is also important to have a good strength base before embarking on a plyometrics program.  For this reason it is more suited to well conditioned athletes.

My strength base is reasonable (through doing running, yoga and Pilates), but as I am not accustomed at present to strength training, I was aching all over today.  The plyometrics squat jumps were partly to blame I am sure, but I also did a lot of gym work on my quads and hamstrings, and some upper body work too.  Hopefully after a few weeks my body will adapt to the plyometrics and strength training and I will suffer from less DOMS (Delayed Onset Muscle Soreness).  I had been planning to run today, but considering how much DOMS I am experiencing, I figured my body needed a day off to recuperate.

Tomorrow is the repeat benchmark performance test as part of the weekly Wednesday night running sessions.  I hope I do a better performance than last time, but considering my tough gym workout on Monday I will not be too surprised if I don't.
Posted by fattofit at 11:27