Coach Jeff is back 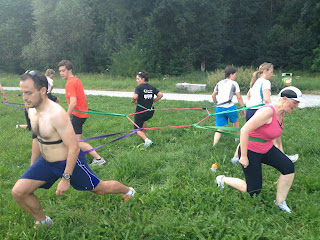 Three weeks we have had to do without the ever popular Wednesday night running sessions led by Coach Jeff.  Two sessions took place with a stand-in coach, although I was unable to attend those due to other commitments, and the other Wednesday was a public holiday (Swiss National day - 1st August), so no session took place.  We were all happy to see him back!

For a welcome present he got us to do pinwheeel. If you don't know what pinwheel is, it is a very hard intervals session.  The pinwheel session this time lasted for 20 minutes.  Pinwheel consists of a centre and then 4 spokes that lead out from the centre.  You either run hard out to the end of the spoke and then easy back, or vice versa depending on what coach Jeff says.  The whole group is split into similar paced runners, and each of those smaller groups is assigned a spoke.  After completing your assigned spoke each group rotates either clockwise or anticlockwise to the next spoke, depending on what coach Jeff says.

I was in the group with Femi and Tobias, both extremely fit runners.  Femi is training for the Ultra-Trail du Mont Blanc® and Tobias is training for the Jungfrau Marathon.  Tobias and myself being extremely competitive, we gave it our all from the moment go.  At first I was out sprinting Tobias and he was very surprised, since he usually beats me.  My lack of speed endurance soon showed up though, and I started dropping back.  I have the speed but not the speed endurance it seems.  Speed endurance is the ability to cover distance at speed, and not just how fast you can sprint (which is speed), or how long you can run (which is endurance).  This is what I will focus on in my training over the coming weeks, but is no surprise that I have a lack of speed endurance at present, having only run just over 70km in the last month.  Speed endurance is critical when attempting a sub 3 hour marathon however.

After completing the pinwheel exercise we rounded the session off with some group resistance training exercises.  You can see examples of these in the photos above and below.  We were all attached together by means of resistance bands, and then as a group we had to complete sets of both lunges and squats.  The resistance bands ensure that the hamstrings also get a good workout, and not just the quadriceps.

Next week is the final lesson of the current series, so we will be repeating the benchmark run that we performed in the first lesson of the series.  It will be interesting to see if I have improved or if my performance has dropped yet again.  I predict that my time will be similar to last time, as although I have not trained much over the last month, my energy levels have come back up to normal again.

With this weekend set to be a scorcher in terms of temperature (well in Switzerland at least) I wish you all a hot, sunny weekend. 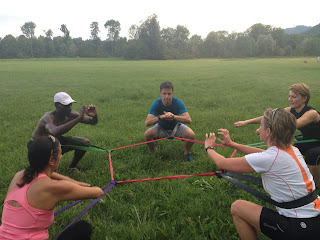