Series 5 of the Hillseeker Wednesday Night Running Sessions gets underway 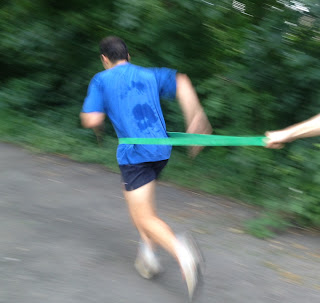 Last Wednesday was the start of Series 5 of the eagerly anticipated Hillseeker Wednesday night running sessions.  At the start of the series Jeff always gets us to do a benchmark performance test, which he then repeats at the end of the series.  Ideally there should be some improvement between the second and the first attempt, although last series did not go so well towards the end for me, as I was suffering from extremely low energy levels.

The benchmark test this time was a cross country run near the Saalsporthalle on a mix of grass, sawdust (the Finnenbahn), gravel and asphalt.  The route started with a grassy uphill then went on to gravel, joined the Finnenbahn for a gentle climb to the highest point, descended the Finnenbahn, then exited it and took us down the road towards the sports playing fields.  The final dash to the finish was a flat grassy section.

The 2 fastest guys (Tobias and Fernando) were absent from the class so it was down to Ryan (the other MDS 2012 finisher) and I to battle it out for first place.  He took off like a rocket up the hill and I didn't stand a chance of keeping up.  My energy levels had recovered slightly compared to the previous days but were still lower than normal (and in fact still are).  I held on in though, staying as close to him as I possibly could.  The gap between us was around 50m by the time we reached the highest point of the course.  On the downhill I decided to attack and catch him up.  I caught up with him just before the end of the downhill and stayed on his heels all the way along the flat to the finish.  Our final time was in the same second, with him just a whisker ahead.  Our shared time was 5 minutes and 30 seconds.

After allowing everyone time to finish and get their heart rate back to normal we did some mental toughness talks relating to how you can use interaction with others to improve your own performance.  Jeff told us that he wanted us to do 3 hill sprints, each time using a different mental toughness technique.  The first time we were to run up the hill as fast as possible and imagine that the person in front was our prey and we were a predator, looking to catch and devour them.  The second time we were to use all our energy to encourage someone else to do well.  Then the final time we were to pick someone very special and do the run in honour of them.  I chose to do the last run in honour of my late grandmother, the only close family member who has passed away so far touchwood.

To do the second run we used elastic bands and paired up.  One of the pair ran with the band around their waist, whilst the other provided some resistance and a lot of encouragement for the other to run faster.  Then for the third run we had to write down on a piece of paper the name of the person we were doing the run in honour of, and then keep the paper in our hand whilst running.

After completing all 3 hill sprints we regrouped and Jeff asked us if any of the 3 tactics made us run faster in our opinion.  Several members of the group thought that running in honour of someone was a very powerful technique.  I myself found that technique very powerful, but preferred the one where someone was encouraging me to run faster.  I felt that running in honour of someone, I was too willing to push myself past my safe limits.

If you feel like going out and trying those techniques I would be interested to know how you get on with them, and which one you prefer.  They can be useful tools for your tool belt that you can pull out when needed.
Posted by fattofit at 09:59