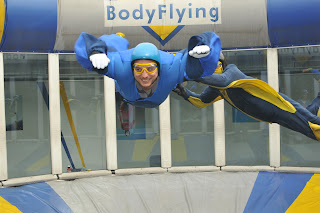 Last Saturday I found myself at Bodyflying Rümlang in Zürich along with some friends of mine.  It was a really great way to spend a couple of hours, so much so that I have booked to go again in a couple of weeks time.

For those who have never heard of bodyflying, bodyflying is a fairly new and trendy sport.  It is not only fun, but also also affords parachute jumpers extra training possibilities.

For those who like the idea of parachute jumping, but have no particular desire to jump out of a perfectly good aeroplane, bodyflying could be a great alternative.

Participants enter a vertical wind tunnel where a specially designed propellor provides the vertical lift needed to fly on the generated air stream.  If you maintain a position similar to the one I am demonstrating in the photo you can achieve stable flight, and hover on the air stream.  By moving various parts of your body you can then move backwards or forwards, up or down.

Advanced bodyflyers can even do tricks like somersaults and spins and a whole host of other artistic movements.  Saturday was the first time for everyone in our group though, so achieving stable flight was in itself challenging at times.  We had two short flights in total.  The first was led completely by the instructor, with him moving us in whichever direction he chose.  The second was designed to let us see how we coped with minimal help.

Most of us managed a few short hovers by ourselves, but the second flight was certainly more challenging than the first.  My main mistake was being too tense and looking down rather than forward.  I am hoping that with the benefit of knowing some of the things I did wrong last time, my next bodyflying session will allow me to feel much more in control of my movement in the air stream.

One thing I know for certain though is that is going to be another fun day!