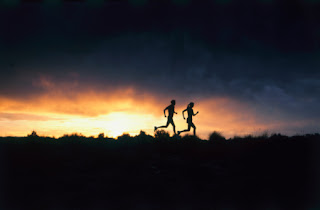 Since I cannot run at the moment still, I thought I would write a post about night running.

I personally love running at night.  There is an apparent air of peace and tranquility once the sun goes down, and yet at the same time all my senses appear to be heightened.  I also love scuba diving at night, for very much the same reasons.  Not only that, but you tend to see different animals.  Your chances of spotting deer are much higher at dusk and at dawn.  There are also other interesting creatures lurking in the night like foxes, badgers, bats and owls.

Night running is not without its risks however.  Firstly there is the issue of visibility.  If you are running off road on trails, then this is not so much of an issue, but if you are running around the city or along country roads, it is a very good idea to wear a fluorescent vest.  You may not win any fashion awards, but at least the cars are more likely to see you and less likely to hit you.

Secondly there is the issue of being able to see the ground in front of you.  In the city there tends to be enough street lighting that you do not need to worry too much.  Outside the city though, you will most likely need a head torch.  You don't want to step on something unexpectedly and turn your ankle after all.  The exception to this is when there is a full moon, in which case you can usually see the trail quite well.  Running under a full moon is a fantastic experience.  Watch out for the werewolves though!

Last but not least, one needs to think about personal safety.  For women this is much more of an issue than it is for men, but even for men it can also be an issue.  Let's be serious - the biggest risk is sexual assault or rape.  Most thieves would not think to rob a runner.  It is not as though we carry large sums of cash or expensive jewellery on us.  You might not want to show off all your flashy gadgets in poorer areas though.

A self defence course can be a good investment for female runners, and even male runners who are interested to do one.  They teach you the best targets to go for like the groin, eyes, shins, throat, solar plexus and such like.  If someone grabs you from behind for instance, stamp on their feet or shins or try to elbow them in the groin.  A pair of keys in your fist can make a good weapon if required.

Dogs can be an issue at any time of day, but sometimes at night there is no one else around to help you.  Coming upon a nasty dog without its owner in sight, the best thing you can do is slow your pace and try to walk slowly past the dog.  If you feel your life is under threat, grab a stone or rock and hold it in the palm of your hand. If the dog does attack go for the nose, which is a very sensitive area.  If worst comes to worst I have been told that you can kill a dog by ripping its front legs apart.  It may not be a nice thing to do, but always put your life first.  If you are carrying water, sometimes just throwing water on the dog will cause it to go away.  Whilst cycling through South America we were chased by dogs that appeared aggressive on a daily basis.  Nine times out of ten they were all bark.  I had to try the water trick once on a pack of three dogs that was chasing me, and I can tell you that it worked.  The dogs seemed surprised and then they started to argue amongst themselves, allowing me to slip away unnoticed.

Zurich is a very safe city and I run absolutely anywhere I want at any time of day or night without feeling at all threatened.  My favourite is running in the woods at night.  On the other hand, Anny always tries to stay within the more populated areas of the city when running after dark, and I think this makes a lot of sense.  Even in a city as safe as Zurich, things can happen.  Bad people can travel easily nowadays with globalisation.  A better safe than sorry approach is just plain common sense.

So please don't be put off, but stay safe, be seen, and enjoy what is a very interesting experience - running after dark!
Posted by fattofit at 13:45