Pisa it is. The countdown begins... 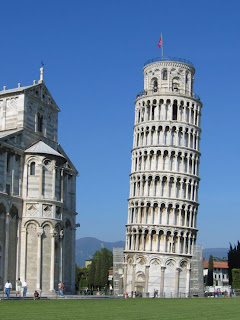 With my base fitness extremely high, having followed Jeff Grant's tailor made coaching plan since the beginning of September, it was time to look for a competitive event to train towards.

My current aim is to run a sub 3 hour marathon.  I know I cannot do that at present, so I needed to find a marathon that would take place several months from now, giving me sufficient training time to improve and get closer to my 3 hour target.  If I had to make a rough guess now as to what I am capable of, I would estimate between 3:10 and 3:15.

The problem with looking for marathons in December is that there are hardly any of them.  Most people don't want to run races in the middle of winter, and there is the danger of slipping and falling on ice.  Luckily though I found the Pisa City Marathon, which takes place on the 16th December.  I checked the timing with Jeff and he thought that it gave us sufficient time to train beforehand. So I put my pen to paper and signed on the dotted line.

The Pisa City Marathon is meant to be a flat, fast course, so it should be a good one for setting a new PB.  Whether I really am capable of a sub 3 marathon by December, I am not sure yet, but I should definitely be able to set a new PB.  When I ran the Zurich marathon in 2011 I completed it in just under 3.5 hours.  That was after only 2 months of solid injury free training and carrying a few kilos more than I am now.  So the odds are certainly in my favour.

Jeff's coaching plan has me doing a lot of speed endurance work plus a weekly long run.  A typical week consists of 2 to 3 cross training/ strength sessions (either Crossfit or Pilates or both), a hills session, a long run, an intervals session and/or a tempo run.  I usually get one full rest day per week.

In the first few weeks following the plan was quite tough.  I was aching most days, especially after the CrossFit classes, which were very new for me.  In CrossFit we do a mix of short runs, rows, bodyweight exercises and free weights, and it was the free weights that I was not accustomed to.  But now a month later my body is starting to get used to the free weights again, and I am usually aching very little the next day.  I have noticed a small amount of weight gain since I started the strength training, due to additional muscle growth, but I feel faster when running too.

I plan to book another lactate test in the next few weeks to get an accurate marathon prediction.  But the other day I did a 3k time trial at lunchtime and covered the distance in 11:31.  Using a tool I found online, this gives a marathon prediction of 3 hours 14 minutes and 42 seconds.  That means there is still some way to go, but I still have several months of training left.  And on that note I need to prise my fingers off this keyboard, put on my trainers and do the hills session that Jeff has put in his plan for me today.