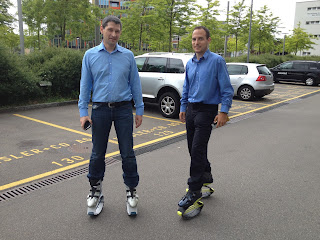 Have you ever heard of Kangoo Jumps?  My colleague Waldemar and I are wearing them in the photo on the left.  You may think they look a bit strange.  Basically though, they consist of a giant spring-like device attached to the bottom of a rigid boot.

Today was the opening of a new fitness centre not far from work, and I persuaded Waldemar to join me in making a trip there, so that I could get the chance to try out the Kangoo Jumps.  I first came across them in the Zurich Writers Workshop a few weeks back.  One of the other participants had a pair of boots that appeared as though they had been beamed down from outer space, and I had to ask her to explain what on earth they were.  As soon as she told me they were called Kangoo Jumps I went on the web and started googling them.  Kangoo Jumps were in fact invented by a Swiss man and have been around for more than 20 years now.  It seems that they are being marketed a lot better overseas than they are here, as no-one that I have talked to here has heard of them before.

I emailed the Kangoo Jumps franchise in Switzerland and asked them if they would be willing to give me a pair to try out for free.  I got a reply saying that they would like to meet me in person to discuss my proposal, but there was also a chance to try them out at the opening of fitnessoutlet24.ch today or tomorrow if I was interested.

The fitness store is located about 10 minutes away from work by tram, so Waldemar and I popped by at lunchtime today.  There were lots of children wearing the Kangoo Jumps and as soon as we arrived we asked if we could try them out too.  Putting them on was simple and they have similar fastenings to a roller blade type boot.  Next was the standing up part.  The Kangoo Jumps instructor gave me her hand to help me up, but I reckon it would have been easy enough to do by myself too.  Once on my feet I felt ever so slightly unsteady, kind of like balancing on a bike at a traffic light.  The instructor told me it was much easier to balance if you keep on the move, so in this way it fits with the bike analogy I gave above.

It was very easy to get the hang of them, and after just a few steps on the spot we started our boing boinging like a kangaroo (hence the name Kangaroo Jumps) around the car park.  Waldemar was very adventurous and started jumping on and off the pavement and going up inclines and all over the place, but I was trying to talk to the instructor and find out what they are good for.

The instructor only spoke German (and Hungarian) so my understanding was somewhat limited, but the main point I picked up from her was that they are a really good rehabilitation tool if you have knee or joint problems.  I went online to get more info, and on the Kangoo Jumps website it says that they can reduce the impact of normal jogging by up to 80% whilst still providing a fantastic cardio workout.  On top of that they were really fun to run in.  Waldemar enjoyed his experience so much that he has already gone out and bought a pair. 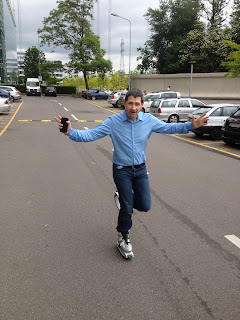